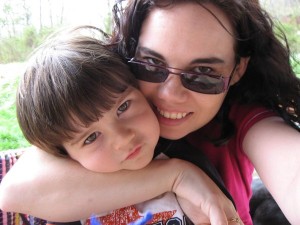 This is one of my favorite pictures of myself and my youngest son.

I have likely always had Celiac disease and never knew it.  Looking back, I had so many symptoms but no one realized what I had.

I was always constipated and always tired as a child.  I remember being tested for iron deficiencies and other related tired symptoms.  No one thought of Celiac back then.

As a teen, I started developing what I was told was migraines.  I always thought they were hormone related.  Especially after they got better once I went on birth control pills.  I also had less migraine issues when pregnant with each child.  Later after researching, your body apparently somewhat suppresses things like Celiac disease when pregnant.  Now I rarely have migraines and almost always can related it to cross contamination or something I ate.

Also as a teen, I got my first allergic reaction to penicillin. That’s antibiotic #1, more to come.

By college I weighed a whopping 91 pounds, 24 inch waist and ate like a horse!  We just thought it was normal that I was so small.  I can still remember so many people asking me ‘where do you put all that food?’  They probably thought I had an eating disorder (unless they knew me well enough) and were too afraid to ask.

Also in college is when my digestive system started flip flopping between constipation and diarrhea.   Fun stuff right?  It wasn’t bad enough yet though to really affect my life too much.  Yet is the key word.  That started in my 30’s.

Oh, and ever heard of ‘chicken skin’ on your arms, particularly the back of the upper arm?  Yeah, those tiny bumps on your arms are very common for Celiac.  I’ve always had those.  They are pretty much gone now.

After having my first two kids, I started developing allergies and sinus infections.  After having my 3rd child, I had such bad allergy symptoms my family doctor wanted me to go to an allergist.  Even he was puzzled as I was only barely allergic to two molds, yet my sinuses were always inflamed, ears clogged, etc.  Within weeks of going wheat free in 2011 (on accident, I was trying the paleo diet to lose some extra weight from having 3 kids), I was able to get off of all of my allergy meds!

Once figuring this out, I started doing research and ran across something called Celiac Disease.  I had so many of the symptoms and then relief when going off wheat.  Yet sometimes I still got symptoms.  Finally January 2012 I decided to eat barley soup.  Nothing else in it but barley and vegetables.  I was so sick!  Throwing up for hours and other unmentionables.  It was like I had food poisoning for days.  Then in December of 2012, after having my children tested and the oldest positive for gluten antibodies, a gastroenterologist officially diagnosed me with Celiac.  Now here I am today, telling my story in the hopes it will help someone else get on the road to recovery sooner!