While we aren’t big doughnut eaters, sometimes they are good for a treat.  When our oldest was part of their ‘Today Show’ at school and I found out they always bring doughnuts for a treat on Fridays I didn’t want him to be left out.  So I found Kinnikinnick brand Gluten Free Doughnuts in our local Kroger’s freezer isle.  These doughnuts are pretty darn good!  We’ve tried both the cinnamon and the vanilla glazed varieties and both are very tasty.  Their texture is also very close to a normal doughnut.  They are more like the ‘cake’ variety that you can get in the doughnut store rather than the fluffy glazed kind.

I’ve tried probably 4-5 gluten free breads.  Some to OK to some awful.  Our favorite by far is Udi’s Gluten Free Bread.  I like their White and their Whole Grain versions.  Even though the kids were used to ‘whole wheat’ bread and preferred it to regular white bread, they like the white version of Udi’s best.

What I love the most about this bread is you can’t tell it’s gluten free when it comes to taste, texture and the ability to hold together!  I have made the following items with it with no noticeable difference between how it works and tastes for these food items.  In fact, some things taste better with this gluten free bread!  The kids would even request me using the gluten free bread for French Toast for example, before I made the house completely gluten free!

I have a Chicken Casserole that we just can’t do without at Holiday time that has seasoned bread crumbs on top.  Finding Gluten free bread crumbs locally is difficult and expensive.

We don’t particularly care for the heals in our bread so they are perfect to make bread crumbs from!  Every time we’re done with a loaf of Udi’s Gluten Free bread I throw the 2 heals in the freezer!  Very quickly, I have plenty of heals to make crumbs from!

Preheat oven to 300. Process bread in food processor until desired consistency.  Place crumbs on baking sheet and bake for about 10 to 15 minutes.  Stir occasionally to let the moisture out and get the crumbs evenly baked.  I find the gluten free bread retains the moisture pretty well during this process.  Once bread is completely dried out take out of oven and add spices.  Allow to completely cool before storing in a zip lock bag.  They should keep for about 6 months if completely cooled before storing.

Some gluten free substitutes for breaded items have a weird texture and taste.  We’ve found at our local Krogers the Saffron Road brand to make excellent chicken tenders!  You can’t even tell they are gluten free!  The texture is great and works best when you put them in the oven.  We like to use our toaster oven for these so we aren’t heating up our big oven to bake them.  I hope you like them!

The great thing about these is they are Certified Gluten Free!

One thing you might miss when going gluten free is Delivery Pizza!  This is actually pretty simple to do at home if you just make one simple tweak to how you normally make pizza at home!

First I start with Udi’s Gluten Free Crust.  I can find this at our local Kroger’s for a pretty reasonable price (almost the same as gluten crust!)

Next I use a very simple, jarred pizza sauce.  By simple I mean something with very small number and natural ingredients.   I like to use Mid’s pizza sauce.  It’s usually just a few dollars in our Krogers.

Next you can put on any toppings you like.

Here’s how I made the pizza below. 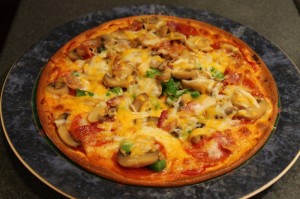 Preheat oven to 375.  Layer pizza sauce, garlic & onion powder, cheese, then toppings onto gluten free pizza crust.  Bake for 7-10 minutes.  Once cheese looks nice and melted and toppings hot, switch your oven to broil for 1-2 minutes.  It’s important to keep an eye on the pizza at this point!  Watch until the cheese really starts to bubble and the edges of the pizza turn a golden brown.

Optionally: When you get ready to switch to broil, add a sprinkle of fresh cheese on top to help hold all the toppings together.

Ultimate Taste Test!  So for our oldest’s birthday party, I made these Gluten Free Pizzas for all the kids.  They were simpler with just cheese or pepperoni since that’s what they preferred.  I got lots of compliments from the 10-11 year olds on the pizza!

A friend of mine shared with me this gluten free book as it’s currently on special for $0 on Amazon!

While I haven’t tried any of these recipes yet, I was blown away by this cookbook.  First of all, when cooking gluten free deserts, especially ones that typically have flour in them, it is completely normal to have 5 or more ingredients to replace regular gluten flour plus all the other ingredients in the recipe!  What I loved about this book is there are a lot of recipes in it that have around 5 ingredients total!  At this time in my life, I really don’t have the time or patience to do a recipe that takes more than 10 ingredients.  So I loved the fact that there were so many simple but yet delicious looking recipes in it!

The book also includes pictures and also the more complicated recipes too if that’s your style.  I truly can’t wait to try some of these recipes.  I would have been perfectly  happy to have had to pay for this one.  Super excited I found it when it was on special for $0!  Check Amazon for the current price!

If you have one or more in your home that has Celiac disease, it seems to be a debate on whether to try to keep separate gluten/gluten free areas or make the whole kitchen gluten free.

For us, I started figuring out my need to be gluten free in early 2011.  I slowly transitioned to wheat free in 2011 when initially thinking it was a wheat intollerance.  Through experimenting eating purely barley soup in early 2012, I found out that I also had major issues with barley.  I had been suspecting issues with all gluten because despite being wheat free, I’d still have unexplained symptoms when being wheat free.  Once I went gluten free completely in 2012, I quickly found out that even the tiniest amount of gluten threw my body out of whack.  Because of my extreme reaction to gluten, I talked to our kids pediatrician and he agreed it was worth screening the kids.  To our surprise, the oldest came back positive for gluten antibodies!  We found this out in November of 2012.

Since finding out he had to be gluten free as well, we started switching more to gluten free in general in our household.  We still kept regular gluten bread in the house for the other two kids and for dad, though.  We marked peanut butter, jelly and other jars as gluten free or not.  This was to eliminate cross contamination from someone making a peanut butter and jelly sandwich with gluten bread and double dipping into the jar.  Even something like this was making me ill.

After 3 months of worrying if someone got the wrong jar we were finding a pattern that our oldest also got gluten symptoms at the same time that I did when there was a risk of cross contamination.  For example, we didn’t have 2 separate butter dishes.  So there was the potential for someone to make toast and get gluten crumbs on the butter.  Also I had to be careful to wipe out the toaster oven, counters, etc when making things for the two of us.  I was regularly making our meals on plates rather than counters or cutting boards.  It started to be pretty consistent when we both would have issues and I was getting very frustrated about getting sick in my own home!  It’s the one place you should feel safe to eat and not have to worry about getting gluten!  It was one thing for me to get ill myself, but to have my son describe the issues he had the next day to me really set it home for me!

The past few weeks I have removed all gluten from the house, I have started buying only Udi’s Gluten free bread for the whole family!  While this does increase our grocery bill by about $6-12 per week, a worst case of $50 extra per year is nothing compared to knowing that the house will be safe.

Since switching to all gluten free in the house I have had only one episode of gluten issues.  We do have a few pizza jar sauces in the fridge that have cross contamination potential in them.  I’m interested to see how this progresses over the next few weeks.

The first week that I shopped knowing I was not buying any gluten bread was such a relief!  I can’t describe how much relief I felt knowing that I wasn’t buying anything with gluten in it.  We already had switch all our pasta to gluten free about a year ago and only had a few misc things besides bread with gluten in them.  You will just feel so liberated and so much safer in your own home if you go all gluten free.

If you have someone in the household that has Celiac Disease, I highly recommend for their comfort, their health and your sanity to try going completely gluten free.  Besides having your home being a safe place, everyone will also be eating better.  The cheapest way to be gluten free is to simply get items that are naturally gluten free!

Our favorite bread in the house is Udi’s Gluten Free Bread. The great thing about their bread is that it has all these nice holes in it!  This is perfect for grilled cheese!  All that cheese seeps into the holes and makes it so gooey!  Most highly processed breads that are full of gluten are so processed and manufactured that they take out these nice small-medium holes and have tiny ones that the cheese can’t get into.

On weekends, and sometimes on week nights, I like to whip up a batch of home-made hash-browns.  It’s actually pretty simple and the kids love it!

Sauté onion in oil until translucent preferably in a cast iron skillet for extra flavor.  Add green pepper next until a little softened.  Add remaining ingredients.  Stir every 5 minutes, often enough to let the potatoes start to brown but not burn.  Continue for about 15 minutes depending on the size of the potato dices and until they are done.  Taste test and add a bit of salt an pepper if needed.

Most American families are used to eating processed foods for breakfast.  This can be a great issue for those trying to learn to be gluten free.  Fortunately we have many options when it comes to safe cereals!

I’ve included links to all of them on Amazon so you can see what they look like.  I get these though at our local store for a reasonable price.

Below is a list of cereals you might think are gluten free but actually aren’t!  Always look at all the ingredients!  Many cereals contain ‘malt flavoring’ which is made from barley!

Always check ingredients lists every time you buy!  Ingredients change frequently.  Also be cautious of getting store brand cereals.  They don’t always have the same ingredients as brand names!